Buy My Screenplay ‘The Fifth Sense: a Prequel’ 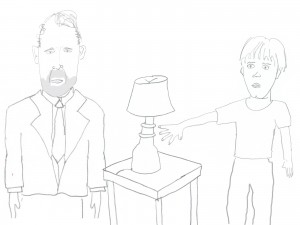 My Amazing Screenplay Just BUY IT

The Fifth Sense: A Prequel to the Popular Thriller ‘The Sixth Sense’

Titled, The Fifth Sense: A Prequel to the Popular Thriller ‘The Sixth Sense’, this film tells the story of the boy who sees dead people before he started seeing dead people.

And yes, Bruce Willis returns to reprise his role as the guy who teaches people how to deal with undiscovered senses.

Before that little kid could see dead people in the popular thriller ‘The Sixth Sense’, he came to terms with another sense; the sense of touch.  With the help of Bruce Willis, the little kid learns how things feel and how to describe textures.

Can he do it?  You’ll have to purchase this screenplay to find out, but here’s a little hint; YES!

He does because Bruce Willis helps him.

“The Fifth Sense: A Prequel to the Popular Thriller ‘The Sixth Sense’”

Bruce Willis sits in a chair and stares at the little kid from The Sixth Sense.  The little kid sits on a couch and extends his hand toward a lamp on a nearby coffee table.

I don’t feel anything.

The little kid waves his arms around in the air and looks panicked.

You’re not touching anything.  You’re not going to feel something until you physically make contact with it.  You’re swinging at air, kid.

The little kid slowly leans forward until he is close enough to touch the base of the lamp.  He runs his hands over the lamp and then smiles.

Hey, I can feel it.  It feels like…like…I don’t know what it feels like.  This is the first time I’ve ever felt something.

Dr. Willis, does everything in the world feel exactly like this lamp feels?

Bruce Willis rolls his eyes and shakes his head.

No.  There’s all kinds of things that things feel like.  Leather, wood, fruit, suction cups. There’s dozens of different things to feel.

Can I stop touching the lamp now?

That’s all I’m going to share!  If you want to buy this screenplay (I’m asking between $700,000 and $1.3 million) to find out what happens, get in touch soon!  This is a sure-fire box-office smash!