Swimming With The Dolphins Not What You Think It Is

May. 05 Opinion no comments

I recently returned from a two-day vacation in exotic Hawaii.  I enjoy getting away on short vacations whenever I can.  Last year I traveled to Spain for several hours and the chance to get away from the day-to-day routines and spend an afternoon in a foreign land is a great way to re-charge my battery.

This was my first trip to Hawaii (pronounced Huh-Why-Ee) and I was particularly excited about one of our planned excursions; swimming with dolphins. For me, this was to be the highlight of my trip. The idea of spending a couple hours in the pool with some of my all-time favorite former Miami Dolphins football players was very exciting and I looked forward to it like a child might look forward to Christmas morning.

So you can imagine my tremendous disappointment when upon my arrival I noticed a lagoon-style pool littered with actual dolphins.  Not ‘Dolphins.’  Apparently this is a popular activity for visitors to this foreign land. Well it would be nice if the people in charge made it clear in their advertising that no current or former NFL players and Miami Dolphins were involved in this excursion.  Nowhere in their literature or website does it state such a thing.  It is misleading. 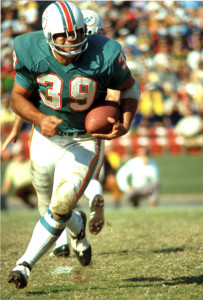 I thought I would get a chance to have a splash fight with hall-of-famer and former Dolphin Larry Csonka. But I didn’t because the stupid thing didn’t include any Miami Dolphins. Just real dolphins.

Instead of frolicking in the pool with the likes of Bob Griese, Larry Csonka or Dan Marino, I’m stuck petting the dorsal fin of a water mammal and smiling for photographs with Flipper.  There were no chicken fights with all-time Dolphins greats like Mercury Morris or Nick Buoniconti.  No games of Marco Polo with Mark Duper or Larry Little.  Not even a chance to pants a guy like Paul Warfield.  Just hanging out in a pool of water that was likely full of wild animal droppings

The lesson in all of this is simple; do your homework, read the fine print and don’t get suckered in to a tourist trap/scam like I did.  I hope by sharing this story that others will avoid the mistake I made.