May. 23 News no comments 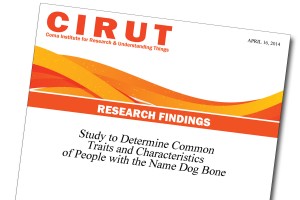 “This study will undoubtedly give parents pause before they name a child Dog Bone,” said Dr. Jimmy, Coma town physician.

Dr. Jimmy conducted the study as part of a national grant he received to “study” important things related to Coma with researchers at CIRUT.

The study found that people named Dog Bone have a greater chance of having a tattoo on their neck or face and are more likely not to  “give a damn” about “stupid bullshit” like math, individual retirement accounts or proper dental hygiene.

The study was conducted over the course of 36-weeks and had one participant.  Researchers said they would have preferred to include more participants in the study but could only find one person in Coma named Dog Bone.

“It would have been nice to have more subjects,” Dr. Jimmy said.

The full report will be released later this month.

Dog Bone Higgens refused to comment saying he “doesn’t give a damn about stupid bullshit.” like a news article.