The first-time closure of Coma’s refuse collection facility came to this reporter in a peyote-fueled fever dream. 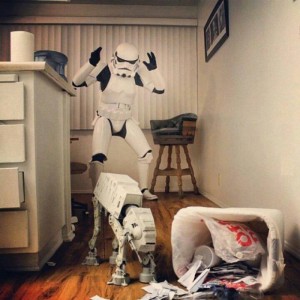 Although there are no actual storm troopers in Coma, someone will throw out this costume rather than putting it on Craigslist.

“Not gonna happen, never happened, and never will happen,” Moab Johnson, owner of the dump, said when told of the impending closure of his facility. The trash receiver could be overwhelmed only i  “every man, woman and child in Coma swarmed the facility to toss useless crap, ” he said.

The eventual useless-crap-throwing-mob will only include about one-third of the town’s population but their deposits will be swollen by a town-wide Internet failure that will render Freecycle and Craigslist inaccessible.
“Oh, no. I’m going to donate these really wonderful items I don’t need anymore to charity,” Town Councilwoman Natalie Peters said when told she will haul four van loads of crap to the dump.
“I only have to wait until next week for them to pick it up.”