Serious has passed the halfway point in its one-year investigation and we’re no closer to finding our lost former colleague. Instead of growing despondent, giving up, and moving on with our lives, we’re going to do what all great journalists do in such circumstances: Turn to conspiracy theories.

Our town is awash in folks with vaguely plausible ideas about the location of Don Johnson Michaels (most involve the Coma Landfill) and the causes behind his disappearance (a WhipIts addiction and running from oppressors/ghosts among the most popular). 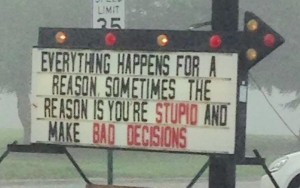 Serious did the only responsible thing and publicly aired the conspiracies that most closely echoed our own biases.

Joining us today to talk about their conspiracy theories are Stan Bargmeyer, an elderly intern, and Stoner Steve, a local drug addict.

Stoner Steve: It’s pretty simple. The editor-guy found something he shouldn’t have.

S: Well, Michaels was an editor so that seems vaguely plausible–

SS: –He found out about the buzzards; that they’re coming for our kids.

S: And I spoke too soon. Why are they coming for the kids and do you actually have kids?

SS: No, I don’t have my own, personal kids but I have communal ownership of kids in this town and everyone knows they’re chock full of nutrients–

S: You have some insight to add here, Stan?

B: This crap about delicious children is a bunch of obvious lies designed to distract us from the real reason that worthless sack boy took off:

B: He was skipping on his commitment to shovel snow from not just my driveway but also the driveways of half the other senior citizens in this town.

S: It’s true, when he wasn’t passed out in a ditch somewhere, Michaels was known for his generous spirit.
Maybe you could just pay a local kid to do it?

B: Pay someone to do my snow shoveling? You think I’m made of money?

B: I blame that temptress of a horse for luring him away.

S: Wait, so now you’re implying Michaels and the horse–

S: Ok, I think we’re going to go ahead and cut it off there before I get sick. Thank you both for your, um, ideas.

Next time on Serious: Everyone’s got an idea they’re sure will make them rich and Michaels was no different. We’ll sit down with a local entrepreneur to learn about the somewhat disturbing innovation Michaels was concocting–spoiler, it was not a baby-making machine–at the time of his disappearance.

← What is Solitude?: An LOL Mystery
Artifacts Doctor’s Note →