The Season of Squeezin’

By Coma News Staff
How many people can you feed with a hug?
One man in Coma is trying to find out.
Town Councilman Jax Owen has pledged to donate to the Coma Food Pantry every time one stranger hugs another and it is captured on film, tape, or sketch pad during this Christmas season. The donations, which will include a range of squeezed juices, applesauce and pumpkin-flavored mashed potatoes, are part of one councilman’s effort to show his appreciation for Coma. 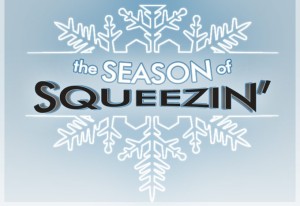 “As much as I want to, I may not be able to hug every woman–or other resident–of this town by Christmas,” Owen said. “But hopefully they’ll think of me every time they’re caught up in some stranger’s big ol’ bear hug.”
The owner of a used car dealership, Owen’s claim to fame before winning public office earlier this month was as the founder of the women-only Hug Club.
Another Town Council member to launch an initiative tied to the holidays is Natalie Peters, who is raising awareness of the flu and other communicable diseases through her Hot Zone for Health initiative.
“Maintaining a two-foot distance from others at all times can cut your risk of contracting explosive diarrhea by 27%,” Peters said. “That’s hard-won experience talking .”