May. 05 News no comments

By Coma News Daily Staff
This week the blotter will intersperse past crimes with present crimes. Submit your guesses on which crimes are from the past and which from the present to townofcoma@gmail.com for a chance to win a 72 cent coupon from the Foot Bucket, where it’s not just fast food, it’s fun food. 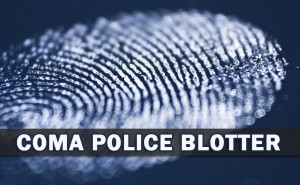 There’s no reason crime can’t be fun. Check out the crime blotter to see how you can play along.

An outhouse on the property of John Butt exploded and burned to the ground on Saturday. Butt was “slightly singed.” The cause of the fire in the candle-filled outhouse was unclear. But the damages included a large quantity of curing meat lost in the explosion.

Three people were arrested for possession of marijuana, after their 2016 Toyota Prius was pulled over for speeding.

Silas Beekeeper, a well-known Coma farmer, was on his way to the city with a large quantity of cash when several strangers approached him. They ascertained that he was in possession of a large sum of paper currency and convinced him to join a high stakes poker game at a nearby house. But when Beekeeper arrived at the house he discovered–instead of a card game–other men armed with a variety of clubs. They stole his money, assaulted his person, and threw him in the dung canal.

Two men were arrested for possession of Oxycontin without a prescription Sunday after police responded to the report of a fight at Chase’s Trailer Crossing, which was refurbished in early 2016.