News developments in Coma are about to get, more hard hitting, juicier, and tech savvy, thanks to the newest staff addition to this publication.

“This person seems capable of helping to put our town newspaper on the journalistic map, which has nearly disappeared,” said Davis Montgomery III, publisher of Coma News Daily. “As long as he continues to work for free churning out tons of content, I’m sure he’ll be invaluable to our organization’s continued success.”

You’re not just reporting the news in Coma you’re getting free fried chicken.

Reynolds, who was previously a metro reporter for the Los Angeles Times, was not recruited by Montgomery. Instead, this newspaper’s newest reporter was hired following desperate pleas by his older brother, Dr. Jimmy.

“He’s been sleeping on my couch ever since his stress break but I think several weeks of all-day napping is probably sufficient,” said Dr. Jimmy, Coma physician.

Jonny’s early resume included a Journalism degree from  Northwestern and stints at the Washington Post and the Boston Globe. In 2007, he became the first reporter to use Twitter to send a sarcastic tweet–forever changing the journalistic landscape. 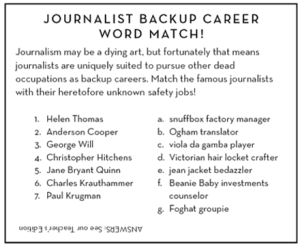 However, his latest claim to fame was riding a tricycle in his underwear down the shoulder of I-405 in Los Angeles after a “stress induced psychiatric episode.”

In a happy hour interview at Bear’s Biker Bar, Jonny was hopeful about his future.

“I’m better now; just taking it one day at a time and not being too hard on myself,” Jonny said.

Meanwhile, Montgomery said the newspaper was planning to invest “upwards of three thoroughbreds” in social media initiatives led by Jonny.

“This better boost this newspaper’s revenue substantially, or my small army of stable boys will see their pay cut substantially to offset the losses,” Montgomery said.

← Letter to the Editor: Talkin’ Trash
You Should Get Grotesque Injuries Looked at by a Medical Doctor →