The following is a blog excerpt of a local resident and business owner provided as a community service by Coma News.

Daddy Warbucks: Marybell, stop surfing the internet and get a job.

Me: Hold on, Daddy, I am solving an important mystery: How Ryan Gosling became pregnant.

There are lots of ways people can get pregnant these days like under a tree or in the Home Depot shower head section. It’s super hard to know when and where pregnancy might happen.
There are lots of stories going around about Ryan Gosling’s pregnancy and we may never be able to pin down how and where he and Eva Mendes got pregnant. It’s also super confusing because no biology class I took ever even mentioned male pregnancy (I think). 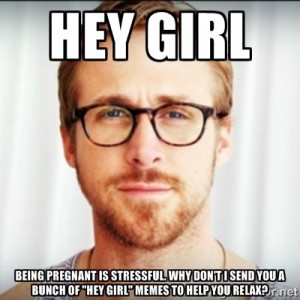 But what every important news magazine has made clear is a fact: Ryan Gosling is now pregnant, along with Eva Mendes.
So what happens now that he is pregnant? I decided to use my detective skills and flesh out what happens after men get pregnant along with women.

I went to the labor and delivery wing at the Coma Medical Center. they have A Lot of rules about who can visit the new baby area so I slipped on some nurse pajamas covered in stuffed bears.

It was there that I met Dan. He was standing outside of one of the rooms looking like he’d been drinking. Inside the room there was a lot of moaning and screaming that sounded like me at the last Justin Timberlake concert.

“What’s going on in there?” I asked him.
He gave me a strange look. “My wife is in labor.”
“Oooooh,” I said. “But wait, don’t you mean you’re in labor since you’re both pregnant?”
“It’s weird, we’ve gone through months of mood swings, weight gain, sleeplessness, and an inability to get out of bed without a chair lift,” he said. “But despite going through all of that together, the baby never seemed real to me until now.”
At that point a real nurse (whose pajamas were covered in baby giraffes?) found me and escorted me from the hospital. And that is how I solved the mystery of how Ryan Gosling got pregnant and what will happen to him by the end of his pregnancy.
Daddy Warbucks: Get a job, Marybell.
Me: Maybe I will become a doctor, Daddy! After I am done as a private dick (gross).