Everybody loves cats. They are fun, furry, highly intelligent and very clean animals. They are one of the top two most common house pets, and they are beloved all around the world. In fact, they were once worshipped as gods in ancient Egypt for their proud stance and soulful little eyes. Even those people who take it upon themselves to drown kittens must recognize that cats have a very special spirit. Now the Coma Community Players have brought us a new play that captures the magic and majesty of cats, titled, appropriately Cats.

Cats celebrates the humor and deep emotional connections that exist between cats and their owners. That is what I assume from the poster. I was not able to attend the opening night performance for which I had free tickets. My neighbor’s cockatiel Hercules had diarrhea, so I was unable to make it out on opening night. I tried to get Hercules admitted to the hospital, but the hospital staff told me that Hercules was fine and that bird poop is naturally runny. Puh-leese. I know diarrhea when I see it.

It came as quite a disappointment to me to miss the show as both a cat lover and theatre buff. Director Shane Wilhelm Darvish, a regular at the old-fashioned ice cream shoppe where I work, is an exciting new voice on the stage, a visionary young artist. The script is by Sir Andrew Lloyd Webber, with whom I am not familiar. I think he works at the tire store.

I was first struck by the stunning visual design of the poster hanging outside the lobby of the theatre. I meant to take a picture of it with my phone so I could post it here, but I forgot. The poster seemed to depict two magical creatures, half human, half cat. The two figures seemed to be modeling a pose or perhaps breaking into dance. There were lots of very interesting colors. I wish you could see it. I did my best to recreate it here on this sheet of loose-leaf paper. 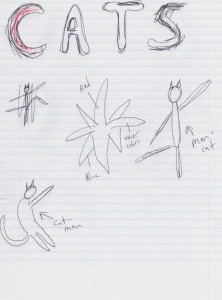 The cast includes a few familiar faces. Cecily Applebaum stars as Skimbleshanks according to the program. If her acting is as good as her quilt-making, then her performance must be truly stunning. The quilt she made for my mother’s funeral was so nice I just couldn’t bury her with it. So now it stays in my downstairs closet, and I take it out and put it on the sofa when I have company. It’s gorgeous. Tommy Lincomb makes his stage debut as Rum Tum Tugger. Now, a lot of people been talking about Tommy lately at the ice cream shoppe, saying he’s too old to be a paperboy. But if it’s okay with old Mr. Turtle who prints the newspapers, then it’s none of our business how Tommy earns a living. He’s a good kid, and, I don’t know about you, but my papers end up on my porch most mornings, and that should be all that matters.

Cats is already generating buzz around town. Drama teacher Craig Robusto claimed Cats is “as good or better” than a high school production. Director Shane Darvis is reeling from the early success of the production.

“A lot of people said if was insane to mount a production of Cats at a small community theatre,” said Darvish. “Especially because we couldn’t afford the rights to do any of the original songs. But in the end none of that mattered. Everybody came out to support us, and everybody loved it.”

If you have not yet been out to see the Coma Community Players’ Cats at the George K. Sieghard Memorial Theatre and Yoga Studio, reserve a seat now. I’m hoping to go tonight, and I will need a ride.