Coma Mayor Dave Anderson announced this week that he will ask the Coma Police Department to look in to the mysterious disappearance of a Steve’s Quality Burrito’s “El Guapo” one-pound burrito.

The Mayor claims he purchased the burrito after work last Wednesday and was only able to finish about one-third of the shredded-beef filled Mexican delicacy. He brought it to work the next morning an intended on eating for lunch. When he returned at approximately 11:45 a.m., the burrito was reportedly missing. 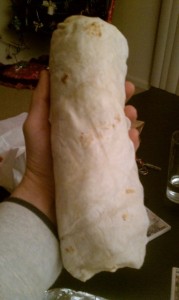 “They only use the best frozen, seasoned, all-natural beef,” Anderson said of the burrito. “I get why someone would want it for themselves, but still, it sucks that they stole it.”

Anderson did a search of the break room and several neighboring businesses when he discovered his lunch was missing.  Anderson then followed up by stopping by multiple offices and cubicles, asking employees if they had seen a giant burrito filled with the freshest ingredients, including Spanish rice and homemade guacamole.  Anderson asked a few of his co-workers if he could check their trash cans, believing no one could finish the nearly two-thirds of a pound burrito in one sitting.

“Whoever it was was one hungry SOB,” Anderson said. “People think they can eat that sucker in one sitting but they underestimate the beans.  The beans in that thing will get you.  Sooner or later, the beans get everybody.”

Anderson, who spent nearly $9 on the burrito, said he hoped to avoid involving law enforcement but as the weekend came and went without any indication of a replacement burrito or even a note of apology, Anderson said he had little choice but to call in forensic experts and law enforcement officials to look into the matter further.

“We will get to the bottom of this,” the Mayor said.  “Years from now, when I’m no longer Mayor of this fine community, I want people to look back on my tenure and say ‘that dude didn’t let people go around stealing burritos.’ That may even be my epitaph.”

Law enforcement officials declined to comment and only confirmed the mayor had made an official complaint.