Coma Mayor Dave Anderson is refuting reports that he had another incident involving a primate last week, despite eyewitness accounts to the contrary.

The alleged incident occurred last Thursday while the mayor was meeting with local business leaders for his monthly “Drinking Coffee with Mayor Dave Anderson” event at town hall.

According to eyewitnesses, the mayor was fielding questions about potential tax breaks for local businesses when a Barbary macaque entered the room and began taunting the mayor.

“It was the weirdest thing,” said one eyewitness who wished to remain anonymous. “At first I thought it was a Rhesus macaque but upon closer inspection I was like, ‘nah, that’s definitely a Barbary macaque.’” 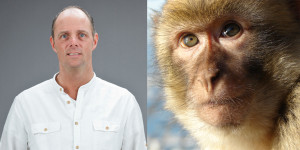 ABOVE: Witnesses say Anderson (left) had an intense altercation with a Barbary macaque (right) last week during a town hall-style meeting

The small primate approached Anderson and extended his small, furry hand. Anderson extended his hand to shake and before completing the gesture, the macaque withdrew his hand, slid his hand past his head and then turned and strutted away.

“It was pretty funny,” said one eyewitness. “I’ve seen that gag before. But something about that little macaque doing it was very refreshing.”

Anderson attempted to continue his presentation but appeared flustered. Moments later, the macaque approached Anderson a second time. According to witnesses, the monkey began to mimick the mayor as he spoke.

“He had it down pretty good,” a witness said. “Hand gestures, arm movements. It was just like Dave.”

Anderson allegedly became increasingly agitated as the small primate continued to mock his movements. At one point, Anderson stopped, placed his hands on his hips and shook his head at the monkey. The monkey gave Anderson a “thumbs up” gesture.

“That seemed to cut a lot of the tension in the room,” one witness said. “But then it got ugly.”

According to onlookers, the monkey began to twist his hand slowly. What started as a “thumbs up” became a “thumbs down” gesture. Anderson rushed the monkey and had to be restrained by several advisors and staff members.

“At one point Dave yelled ‘I’m going to cut you mother fucker’” an eyewitness said. “He grabbed a chair and started swinging but fortunately his staff held him back.”

The macaque, according to witnesses, extended a middle finger to the mayor before exiting the room through a side door. Anderson recently admitted to an unfortunate ordeal nearly 12 years ago in which he punched a monkey in the face, knocking out two of the animal’s teeth.

The mayor told reporters on Tuesday the recent incident has been exaggerated and that there was really nothing to talk about.

“Did I go after a monkey with a chair?” Anderson asked. “Maybe. But who is to say that in some alternate reality the monkey didn’t try to attack me with a chair? Why is no one talking about that possibility?”

Anderson refused to comment further. The macaque has not been seen since the incident occurred last week.