by Coma News staff
Coma needs a hero, Coma Mayor Dave Anderson said Thursday.
Any super heroes in the town’s midst need to “step forward and fulfill your destiny,” Anderson said at a Rotary Club luncheon yesterday.
“If you’re out there and you can hear my voice, please know that we are experiencing a severe crisis in our community and need your help,” Anderson said to the nearly 60 luncheon guests.
Anderson said the heroes qere needed to address a recent surge in unpaid parking and turn signal-related fines.
“This is the hour of our despair,” Anderson said about an estimated $75,000 budget shortfall blamed on the unpaid tickets. “If you have been waiting for a right moment to make your presence known, I beg you to do it now.” 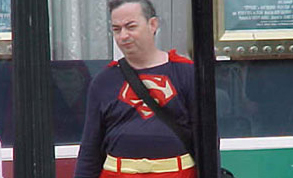 Mayor Anderson called on regular citizens like the one above who may have some amazing super-power and have been waiting to unveil it to the world.

Anderson elicited praise from some residents.
“I’ve always thought I could control animals–or at least predict when they’re gonna crap on my lawn, which I admit is basically every day,” said Town Council member Bob Smith-Smith.
Others were dubious.
“That’s the kind of speach you give for a robot uprising or an evil mastermind ravaging the city, not for some minor parking infractions and moving violations,” Micah Horncraft said.
In a post-speach interview, Anderson elaborated on his plea for help.
“Maybe you’re a math or science expert and you’ve recently been bitten by an insect, or maybe you found a powerful ring or sword or some crap like that,” Anderson said.  “Those are the kind of people who close budget gaps.”
Anderson went on to urge citizens who weren’t sure if they had super powers to try lifting boats, cars or other heavy objects over their head or to even consider stepping in front of a bus or truck to test whether or not they may unwittingly have freakishly super capabilities.
As of press time, no super heroes had come forward.