Larping Duel Ends in Sore Back 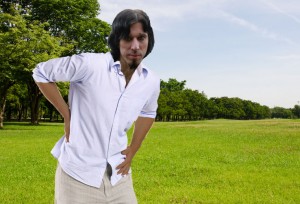 Dr. Jimmy, Coma physician, cancelled a highly anticipated LARPing duel with Town Councilmember Bob Smith-Smith shortly after it began due to “unfair hitting in the back when [he] wasn’t ready and not following the dang LARPing rules.”

“It was not cool at all because I clearly yelled ‘hold,’ and he hit me in the back when I wasn’t expecting it,” Dr. Jimmy said. “That’s not legal. And then he acted like he did something great.”

According to spectators, the entire duel lasted less than one minute. After Dr. Jimmy made a series of opening moves that some said resembled jumping jacks or modified calisthenics, Smith-Smith tapped his foam-wrapped “sword” onto Dr. Jimmy’s shoulder. The physician quickly called “hold,” which is the larping equivilant of a time out. But Smith-Smith attacked again, landing a blow on Dr. Jimmy’s back.

Dr. Jimmy grimaced as he left the larping circle and claimed he could not continue because his back “stung like a bitch” and he would not continue dueling with someone who so flagrantly violated the rules of LARPing.

Dr. Jimmy would not comment beyond mumbling that Smith-Smith had not heard the last from him.