Is There An Easier Way To Mail Cherries?

May. 24 Opinion no comments

It’s the time of year you start to see cherries in supermarkets and stores.  I really enjoy eating a good cherry.  It reminds me of summer and sunshine.

A friend of mine, Gus, lives on the other side of the country.  I’m always raving about how good the cherries in Coma are.  I decided I was going to get him some of those cherries this year!

I decided to mail him some cherries but it is turning out to be a real challenge. 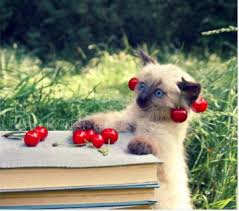 Initially I just set some cherries in the mailbox with a little sticky note that included my friend’s name on it. My postman did not pick them up.  When I called the post office they said I needed to include an address and appropriate postage.

So I went to the office supply store in town and picked up some business-sized envelopes and some stamps.  When I got home I carefully opened one of the envelopes and placed about a half-dozen cherries inside.  I was disappointed about how few cherries the envelope held, but it would definitely be enough to give Gus an idea of how good these cherries were.

I sealed the enveloped and placed a stamp in the corner.  Then I tried to write the address on the envelope but the tip of my pen kept piercing the paper and it was really hard to write legibly on the misshapen envelope with the bulges of the cherries creating such an uneven writing space.

I decided to start over.  So I got a new envelope, placed some cherries inside, sealed it and went to write the address again (!) and again I had the same problem.  The penmanship was terrible.  I couldn’t even understand the writing.

So I tried again.  And again.  Finally, after five attempts (and five wasted stamps), I was able to produce a mostly legible address.  Excited, I took the envelope directly to my mailbox and set it inside.  I then went back into my house and called Gus to see if he had received my cherries yet (he had not).

I called him again the next day and the day after and still no cherries.  A week later there were still no cherries.  Finally, I went to check my mail one day and inside was my cherry letter.  It was covered in dark red blotches and looked as though it had been involved in a horrible and violent crime.  I looked closely at the letter and noticed a yellow stamp on the front that said “Undeliverable As Addressed.”

Oh boy! When did sending mail become so complicated?

As of this writing I have still not been able to successfully mail Gus his cherries.  There has to be a better way to do this but I’m at my wit’s end.  Fortunately, Gus will be visiting me this fall.  So I’m going to keep his returned letter in my desk and deliver it to him myself when he arrives.