Fighting Chickens of the Civil War 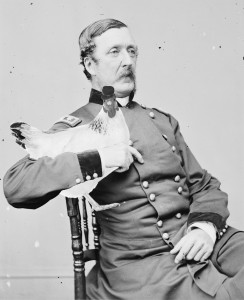 Overlooked by most historians, the Union Army developed and implemented a highly controversial, top secret program to train chickens to serve in the Union Army.  The program was headquartered in Coma not far from where the Coma Unified School is currently located.

Although the program had some early success, particularly at First Manassas, where several chickens were awarded commendations for valor, the fighting chicken brigade ultimately failed.

Military leaders cited hygiene, failure to follow orders, the increasing incidents of fratricide as human soldiers slaughtered great numbers of chickens for food in the field, the fact that their hats routinely fell off and the overall obtuse nature of the chickens as primary reasons for the program failing. 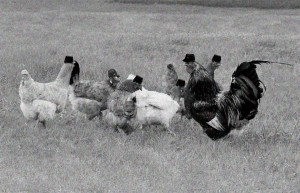 A small platoon of Union chickens take to the parade deck

In what was his last letter home, Captain Eugene Franks of the 29th Coma Brigade, sums up the challenges in training the chickens:

“I have not sufficient paper to express in detail the pause and great fear I have for our dubious endeavor to arm the wild game that now sleep in coops not ten paces from my tent.  After weeks of training and drilling the unit is still without discipline or the steel one would expect from a professional soldier.  In many ways they are no better than the flood of volunteer soldiers we have received from the west.

But I submit to you now in the most private of manner that lately I have begun to grow fearful for my own safety as a number of the feathered creatures have banded together and appear to be in the midst of planning a great coup (not coop).  The way they set their eyes to me is unsettling to say the least.  I was even the object of an impromptu attack last week when one of them took to pecking at the heel of my boot.

I should hope to write you again soon.  If anything should happen to me in the meantime, please know that my love for you continues to grow as my heart aches to be near you again one day soon.  Also know that my untimely demise was likely at the hands of a traitorous fowl.”

The program was dissolved in the fall of 1862.  A small, life-size bronze chicken sculpture was later erected in town but was run over and crushed by a farm truck in 1967. 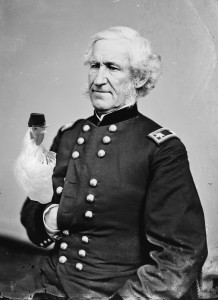 Major Cleavus Young-Bogart poses for a photo with an unidentified chicken soldier (c. 1863)

← Coma Land Mine Tour A Special Experience for the Young and Old
How to Break Up, Get Back With, Break Up and Get Back With Your Ex Using Facebook →