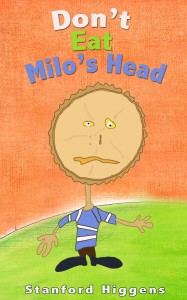 Coma children’s author, Stanford Higgens, released his latest book yesterday at a signing event at the Coma Library.  Titled “Don’t Eat Milo’s Head“, the book tells the story of a young boy named Milo whose head is made entirely out of a delicious, yet undefined, homemade pie.

“The three best things in the entire world are pie, people’s heads and children,” the author said.  “In ‘Don’t Eat Milo’s Head’, I’ve brought those things together into one story that I believe will launch a new genre of food-headed themed stories for children.”

In the story, Milo wakes up one morning to discover his entire head is made out of freshly-baked pie.  As he navigates through his journey, Milo seeks to discover how his head was transformed into a delicious baked good and how such a turn of events will have an impact on the rest of his life.  Throughout the story, Milo must evade an array of hungry bandits, raccoons, pastry chefs and members of the 38th United States Congress.

“I think my favorite scene in the book is when former New Hampshire Senator John P. Hale turns to Indiana Senator Thomas A. Hendricks and says, ‘I’m gonna ratify that pie right into my belly,'” said Higgens.  “Those are the fun little surprises peppered throughout the story.  I mean, imagine a former United States Senator stuffing his face in such gluttonous fashion!  It’s whimsical!”

Higgens said his latest effort has opened his mind to a lot of different opportunities.

“I realize now that you can combine any food item with any body part and whammo! you have a children’s story,” the 49-year old author said.  “It’s inspiring.”

Higgens was quick to defend himself from recent criticism that “Don’t Eat Milo’s Head” is too graphic in places for young children, particularly a scene near the end of the story where Milo’s head is ravaged by a pack of dirty hobos under the Brooklyn Bridge, leaving the young protagonist with little more than crust for face.

“There is a symmatry to this story and I think once people have had an opportunity to digest it, and just for the record that pun was completely and entirely unintended, but once people absorb the journey and reflect upon it, they will see that it all fits together quite magnificently, even if Milo does end up dying at the hands of dirty, filthy hobos,” Higgens said.

Higgens next effort is already in the works.  Titled ‘In the Land of Reuben Hands’, it tells the story of a group of young children who wake up one morning to find their hands have been replaced by delicious Reuben sandwiches.