Buy My Screenplay: No Country For Old Men II 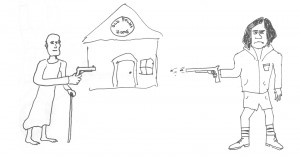 THIS IS THE MOVIE THAT YOU WERE BORN TO WATCH! Unlike anything you’ve ever seen before, “No Country for Old Men II: Revenge of the Old Men” is a movie that transcends genre and cannot be defined.

Javier Bardem’s character from “No Country For Old Men” is still on his quest to kill all the country’s old men.  But when he stumbles across a group of crotchety, arthritic geriatrics who won’t go down without a fight, Bardem is pushed to his limits.  Will he manage to kill all the old men who live in the country?  You’ll have to purchase the screenplay to find out.

“No Country For Old Men 2: Revenge of the Old Men”

Starring Javier Bardem and that guy from “Homeland”

Javier Bardem is lying on the grass in front of a retirement home.  His right arm and both feet have been chopped off.  An Old Man using a walker is shuffling toward him.

You cut off my feet!

Javier Bardem tries to sit up.  He looks around and sees his gun a few feet away.  He tries to pull himself closer.

You cut off my arm!

There’s plenty more where that came from Mary.

Javier Bardem continues to pull himself with the only arm he has left toward his gun.

I’m trying to reach my gun so I can shoot you.

The Old Man quickens his pace, shuffling his feet as he races toward the gun.

Oh, no!  I better get to that gun first so you can’t use it to shoot me.

I better try to get to the gun before you do so you don’t hurt me anymore.  It’s like we’re

racing to reach the gun first and whoever wins this race will have a clear advantage over the other person.

fast enough to beat you.  But you’re right about the person getting there first having a clear advantage.

I wonder what’s going to happen?  Who do you think will reach the gun first?

I’m hoping I get there first.

Both men reach the gun at the exact same time!

That’s all I’m going to share!  If you want to buy this screenplay (only 7 million dollars cash or cashier’s check) and find out what happens, get in touch soon!  This is an amazing screenplay that tells the story we really wanted to see in the first movie (and were led to believe would happen based on the title of the film).