In the fall of 1823, Coma farmer and noted inventor Arwel Hemington stood before a group of American military leaders on his farm just outside town to share what he called “the greatest military invention of the last six-to-eight weeks.” Hemington’s invention was nothing new, but the materials used to create it, he thought, would turn the dairy world, and military conflict upside down.

What Hemington shared on that dreary, cold afternoon on his 43-acre farm was a sword thats blade was made entirely from chilled butter.  Upon revealing his latest invention, the assembled group of generals gasped and gaffawed and for a moment seemed completely in awe of Hemington’s innovation. 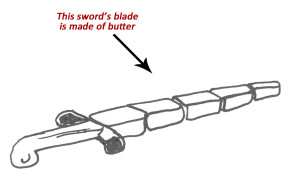 Hemington’s butter sword (above) was a promising econonmic windfall for dairy farmers.

Hemington later wrote to friends “these men of might and brawn appeared to tremble like small school girls at the sight of the sweet-cream, buttery blade. I knew at once I had them in my grasp and before me I foresaw a future in which battlefields would be strewn with bits of the savory, delicate goodness.”

According to United States Department of Defense records, the United States Army ordered nearly two-thousand butter swords on the spot.  Hemington told the group he could produce the weapons at one-half the cost of the standard steel version.

Hemington, who quickly became a hero to dairy farmers throughout the region, delivered the butter swords to Washington DC in person the following spring.  Upon arriving in the nation’s capitol, and much to Hemington’s horror, the swords had been reduced to puddles of melted butter as temperatures soared to the upper 50s.

Ashamed and feeling dishonored, Hemington returned to Coma where he spent his remaining years in a self-imposed exile.  Although he continued to work on a series of inventions, including a suit of armor made entirely from duck feathers and a catapult that shot buckets of luke-warm water at enemies.  Hemington died in 1858. 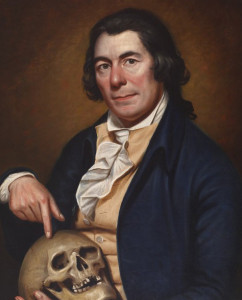 According to friends, Hemington “failed to grasp the nature of warfare.”