According to police reports, the hairy, bipedal humanoid rummaged through a variety of cereal boxes before checking out a Nutella end-cap display and then exiting the store empty handed.

“I couldn’t believe it,” Dee Collins, one of several eyewitnesses, said. “You don’t expect to see that kind of thing at a grocery store.”

The unidentified creature spent nearly ten minutes carefully examining the nutrition facts on at least a dozen boxes of breakfast cereal. After appearing to settle on a box of Cranberry Almond Crunch, the creature picked up a box of Lucky Charms.

“I am the same way,” Collins told reporters. “I try to make the healthy choice but damn, those sugary cereals are so good!” 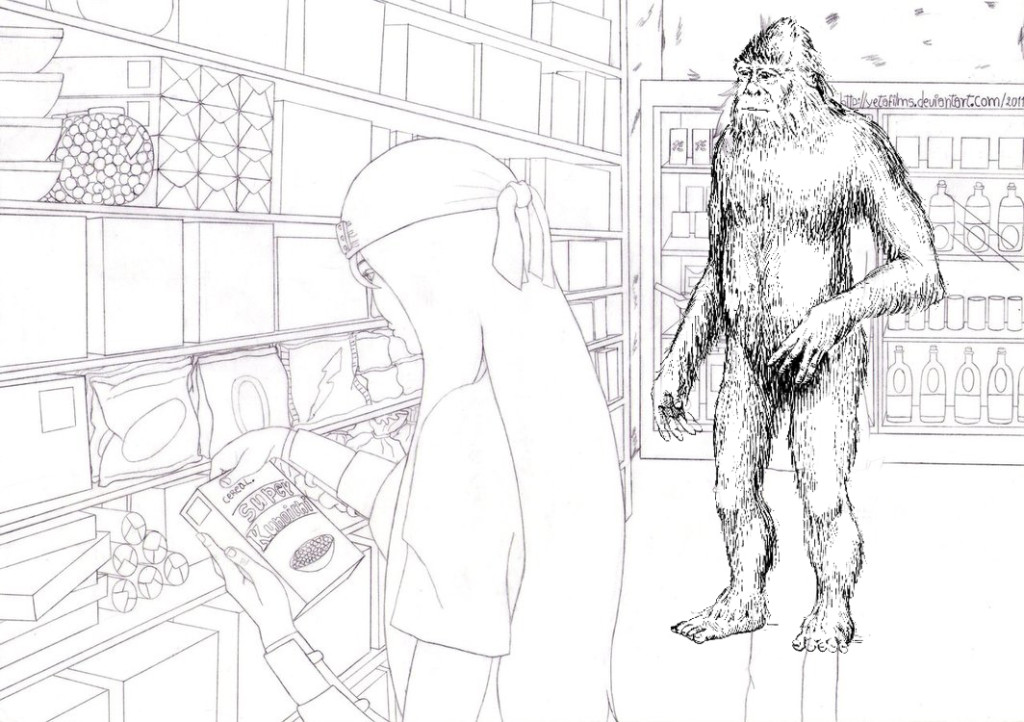 ABOVE: Artist sketch of what witnesses say was a large ape-like creature loitering in the cereal section of a local grocery store this week

According to local cryptozoologist Micah Horncraft, it should not be a surprise that a bigfoot creature would seek a healthy, nutritious breakfast option from a local grocer.

“When you consider the fact that bigfoot’s diet consists primarily of berries, nuts and grains, it makes sense he would seek out breakfast cereal,” Horncraft said. “I mean, it’s not like he’s going to make waffles or anything. Am I right?”

Collins said the creature seemed to “give up” after studying a box of Rice Krispies Treats Cereal. Afterwards, the large beast “sheepishly shuffled” down the aisle until a Nutella display appeared to catch his eye.

“He picked up a jar and smelled it and shook it next to his ear as if he might hear something,” Collins said. “I thought he was going to try to shoplift it but he kind of patted his thighs and hips and must have realized he didn’t have any pockets.”

Store manager Brian Frazier told reporters the store has a strict no-loitering policy and that their staff would be more diligent in the future in managing that policy.

“He must have sort of slipped through,” Frazier said. “It happens. One time we had a horse in the produce section for almost an hour before anyone noticed. Shit happens more often than you think.”

The mysterious creature reportedly left the store and has not been seen since Monday afternoon. This incident is one of an increasing number of bigfoot sightings in the community since 2013.