In what devolved into what some onlookers described as a “bizarre” series of questions regarding bear habitats and gnomes, the town’s first official mayoral debate ended somewhat abruptly on Saturday night, leaving most attendees in a state of confusion. 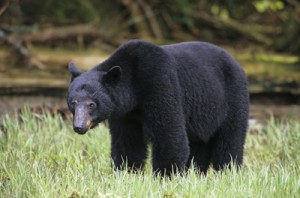 Photograph of what is believed to be a bear

The lady Buchanan was referring to is Coma Unified School Principal, Jamie Towers, who moderated the first in a series of debates leading up to the election on November 6.  Analysts were critical of how Towers handled the debate and suggested she let it get out of hand with her final question about exotic pets and invisible airplanes.

“Nothing like that is even remotely true,” Towers said afterwards.  “There were no questions about pets or bears or anything else that wasn’t absolutely relevant to understanding the candidates’ position on critical issues facing our community.”

Incumbent, Dave Anderson, said later he tried his best to get the debate back on track after Towers lost control but admitted it might have been too little, too late.

“It got weird,” Anderson said.  “She went to places people shouldn’t go in a public setting.”

“I thought I might be on a TV show at first where they play pranks and jokes on you,” Phillips said.  “But I guess she wasn’t joking.”

The next debate is scheduled for next Friday at town hall.  Currently, election officials are searching for a moderator to replace Towers, who won’t be invited back.

A partial excerpt from the debate is included below.

Ms. Towers: Candidate Phillips, what would you do to enhance the continued economic viability of Coma?

Ms. Towers: What, precisely would it depend on?

Mr. Phillips: It would depend on what you mean by the words ‘entrance, ergonomics and availability.’

Ms. Towers: I’m sorry Mr. Phillips.  I did not use any of those words.

Mr. Stonewall: I heard you say something about ergonomics.

Mr. Anderson: Me too.

Mr. Phillips: I don’t know what ergonomics is.

Mr. Anderson: I think it ‘s a type of science.

Mr. Stonewall:  What kind of science?

Mr. Anderson: If I’m not mistaken, it’s the study of fairy creatures.

Ms. Towers: Gentlemen, if we could please get back…

Mr. Anderson:  I think so.  Goblins and gypsies and…I think all of those make-believe creatures.

(there is another, shorter pause at this point as the candidates and Ms. Towers look at Mr. Phillips)

Mr. Phillips: What? I’ve never seen a bear.  I’m not convinced they’re real.  You never know about shit in the wild is all I’m saying.

Ms. Towers:  I think we should stop right here.