By Jonny Reynolds, Staff Writer, Does Not Have Social Phobia 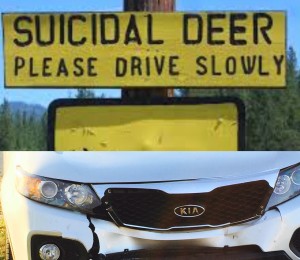 How do you solve a problem like a drunk deer? Coma’s Sheriff says it’s time to give checkpoints a try.

April may be National Deer Collision Month but Coma Sheriff Paul T. Frostnib hopes to make a dent in that tradition. “Deer in this town like knocking back a few drinks as much as anyone else but that’s no reason to take it on the road,” Frostnib said. Here’s what you should know about the Sheriff’s deer sobriety checkpoints going up around town this weekend.

1) Before you ask, yes, drunk deering is a big problem in town. How else do you explain numerous reports of deer smashing into stopped vehicles, Frostnib said.

2) “An impaired deer is like a drunk motorcycle blasting out of the woods and into the side of your car. Terrifying and unnecessary,” Frostnib said.

3) “Only someone drunk as a skunk could run headlong through you truck’s grill, fall out of your engine compartment, and then stumble off into the woods,” warned Frostnib.

4) Deer encountering the sobriety checkpoints will be stopped briefly. When there is an indication that a deer may be under the influence of alcohol or a controlled substance, or if they are in violation of any other Coma Wildlife Code, they will be detained for further investigation.

5) It’s the kind of thing you might think would make wildlife advocates sad, but not so said the Coma Deer Alliance. They put out a statement observing April as Drunken Animal Jerks Awareness Month.

7) It’s unknown how many deer around Coma have substance abuse problems but based on collision rates Frostnib estimates 80 percent of the roughly 4,000 deer around town could suffer from the condition.

8) “We think about these issues all year long, but it’s good to have a month to remind Coma deer that before they tie one on, they need to tie themselves to a tree,” Deere said