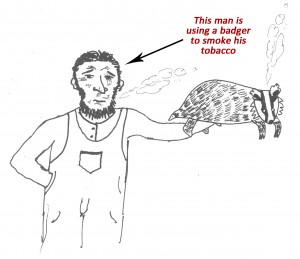 Some of the earliest settlers in Coma lacked the appropriate resources and skills to make proper tobacco pipes.  In 1852, the badger pipe was invented in Coma and provided a way for many to once again enjoy smoking tobacco.

The badger pipe fell out of favor by 1857 due to the fact that most badgers are unwieldy and tenacious animals that don’t like being used as pipes.