Their is no better day of baseball than opening day and Coma’s first all-drama youth baseball team is ready for it. 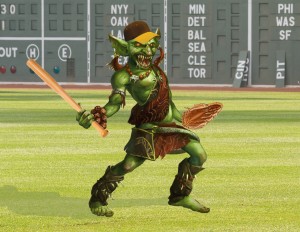 Coma’s newest middle school baseball team is going to encourage actor-players to really “Orc it up out there” this season.

Here are 10 keys to their success and reasons for fans of baseball to get fired up:

2) Make a statement. Players will be encouraged to come to games in any legally permissible attire and do pretty much whatever it takes to let the fans know they’re in for a heck of show.

3) Avoid judging what is going down unless it needs help. That’s right, every player gets high-fives and low-twos after every play.

4) Never pretend to knock on a door by saying “knock-knock.” That one’s self-explanatory.

5) Dare to be dull. If every player tries to be the center of attention at every moment it’d be like some kind of crazy nine-ring circus out on the field. One star at a time, folks.

6) Make a connection with another player. Just try not to make it your switch blade connecting with his body, Sharks and Jets-style.

7) Never expect a certain answer or reaction. If you throw a ball to another player or a coach, don’t expect he is going to catch it. He might just run screaming from it.

8) It doesn’t matter what you do, as long as you sell it. If you want to make a real impression, instead of channeling some jock from a sports movie, impersonate the villain from a gladiator movie. The bloodier the better.

9) Check your emotional stability. If you’ve just had a bad breakup, it might be a good idea for you to put ice on it and sit out this game. Being too emotionally raw out there really limits the dramatic opportunities for the other players.

10) Understand why you’re playing baseball: For the love of drama!

← Buy My Screenplay: Good Will Hunting 2
Advertorial: Kick Some Butt with A Stunt Writer →